How many female fire fighters are there in Australia?

I routinely get asked this question by media, given the study I published in 2006. At present my figures are not up to date, so I decline to comment. It is a shame that fire services across Australia don't routinely make this information available to the media, so that the data is accurate and up to date. However, they may not do so because progress is slow, and some fire services in Australia continue to have less than 1% of females in their paid firefighter workforce. Volunteer fire fighting numbers for women are always higher - I do hope to update my 2006 study soon.

An example of the problems with statistics provided in the public domain.

The Northern Territory Police, Fire and Emergency Services, like all services in Australia, reports annually, including about diversity in the workplace. See the 2012 report here.

If you look at it's statements about volunteer fire fighting women, the following synthesis is offered (2012, p.54)


It's good to see this increase. However, the report goes on to discuss female fire fighters within the overall context of total fire fighting population (2012: p.66). There is no way of knowing how many paid female fire fighters are employed within the NT PFES. A note is provided: Figures include paid and unpaid Inoperatives and Fire Auxiliaries. Fire and Rescue Service totals include administrative staff. 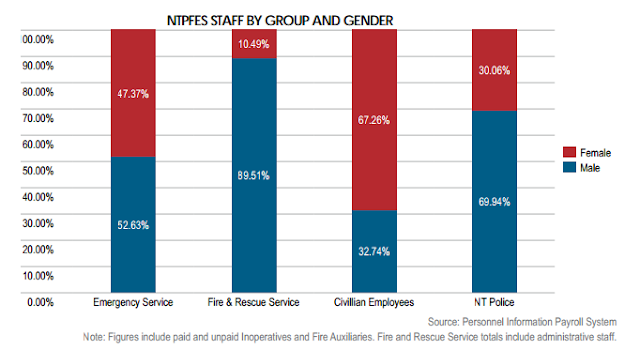 As you can see, a claim is made that "10.49%" of the Fire & Rescue Service are female - but this includes all females - administrative, paid and volunteer. It is entirely possible that there were in fact 0% paid female fire fighters (Annual report 2011-2012) hidden behind this figure. (I say this only because I was contacted by media in 2012 who wanted to interview me to find out why there were no paid female fireys in NT, but this is anecdotal).

Yet when the report covers females employed within policing (eg p. 67), actual numbers of female police are shown.